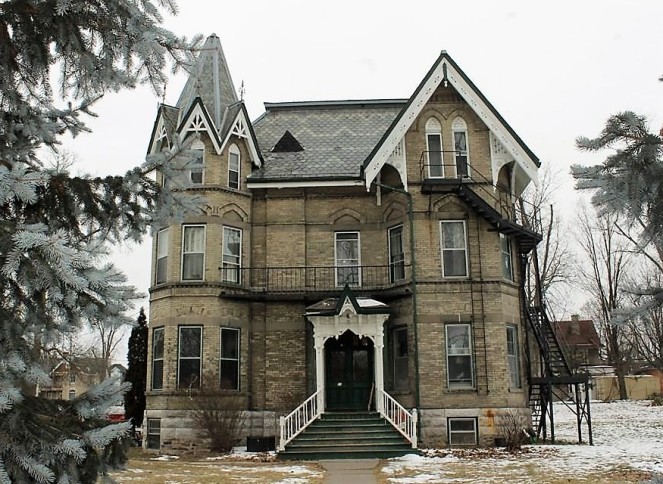 My first bachelorette apartment was one of my favourite places to live. It was in an old grey brick house. The house itself had a gothic look to it with its wide set of stairs that angled inward toward the top, they were lined with a white picket railing that attached to two tall white columns that lead higher into a white arch covered entrance. From the front, the house had two unproportioned bump-outs. The one on the right was more like a hexagon shape and it appeared that two rectangular windows could have fit in the space that held only one, and the roof on this side was a simple V-shape. However, the bump out on the right was an octagon with single rectangular windows fitted into the spaces perfectly, and the roof on the top of this section was a V-shaped crown that rose into an inverted cone. The fire escape ran down from the top window of the hexagon bending and shifting till it disappeared around the corner of the house.

My neighbour upstairs had actually been the driving force behind me getting this apartment because he vouched for me with the landlord. I hadn’t been sure at first of the idea of living alone, but since I had a friend living upstairs it offered me a small comfort. He would often knock on my door on his way past, sometimes he waited for me to answer and other times he just continued up the stairwell that ran up beside my front door. I always knew it was him because the smell of food and cooking grease clung to his clothing after a day in the kitchen.

My apartment had a small bathroom off of a tiny kitchen and then the remaining space was one fair sized room. The character in the main space was derived from the decorative ancient fireplace which had an ornate dark brown wooden mantel that I used to display all my framed photographs. To the right of the fireplace the octagon jetted out and created the illusion of a larger room. That octagon area was all windows with folding wood shutters, and it was my favourite space. I had set that area up cozy so I could spend my time reading or comfortably writing essays. It was a wonderful sun filled chamber with a view of the local Police Station, a park, and Tim Hortons.

However, I often heard a strange clicking sound in the octagon room, but I never really gave it much thought. It seemed to happen at night when I was laying quietly on the floor with my feet propped up the wall and a copy of Lord of the Rings gripped in my hands. I associated the sound to the radiant heating. The pipes lined the bottom quarter of the walls in the octagon room, and this was my first time experiencing radiant heating so the assumption came easily.

There were two other units on my floor, and two above me. The main level and the basement had apartments as well. It was said that the house itself had at one point been a family run funeral home and the basement had been where the bodies were prepared. I enjoyed sharing that bit of history with my more squeamish visitors. Perhaps as an emphasis of that creepy revelation, or perhaps as punishment for teasing my friends, I had a surprise one night that appealed to my own squeamishness.

I was sleeping on a mattress on the floor and I woke to a swishing sound which changed periodically to a scuffing sound on the light grey carpet around me. The carpet sound reminded me of the noise a mouse makes when moving around in the dark. I froze in the pitch black room and tried desperately to focus my eyes. The sound changed again to a sound like paper flapping in the air. Silence. Scuffling and a slight tugging sensation at the crown of my head involving my hair. I bolted straight up and whammed the light switch as my heart thundered in my chest. I was so busy casting my eyes over the grey Berber carpet that looking up hadn’t occurred to me until I felt a soft puff of air.

An instant later my thoughts had completed the dramatic shift from mouse to bat, and it was almost at the same time the tiny creature dove past my line of sight. I crouched, my adrenaline shot up and my mind kicked into hyper drive. The dam thing was going crazy flapping around the room and dipping low. My horror stricken mind went to thoughts of it purposely attacking me. The creature’s crazy flying pattern certainly created an impression of it dive bombing my head. An image of this crazed creature tangled in my long hair, both of us frantic, was more than I could bare. I screeched and fled from the room. I managed to bang on the kitchen light, grab the phone, and leap into the bathroom in a single motion.

Once safely inside I wildly raked my hands threw my hair trying to assure myself that I hadn’t inadvertently capture my winged visitor in my mad dash from the main room. My second measure of safety was stuffing a towel under the door because the last thing I wanted was it following me. I waited. As I stood there I started to feel a bit foolish, yet there was still an uncertainty about what to do next.

I called my step-father knowing that as a shift worker he often kept strange hours. He answered, and once I had assured him that my middle of the night call wasn’t overly ominous he burst out laughing. Although I wasn’t entirely sure I agreed, the best advice I received was that I couldn’t stay in the bathroom all night. Bravely I slung a towel over my head to protect my nest of hair and I edged the door open. There was no sign of distraught flight so I inched out into the kitchen. I gripped the phone in my hand still and described my progress into the handset and I ignored the silent amusement that leaked through the phone line. The little night demon was gone.

I slept with the lights on the rest of the night and a towel stuffed under my front door. The clicking noise had a new meaning now, it was more distinct then the movement of heat and water. It was more than clicking now that I was listening with a bit of knowledge, it was accompanied by scratching and squeaking. My step-father told me that the bat can squeeze in through a small hole, a hole as small as half an inch. I combed the area around the heating pipes for small holes and found none. It seemed that under the front door was its likeliest spot of entry.

Several nights later it returned. This time I acknowledged that I had the size advantage, and I loudly reassured myself that these creatures ate bugs. Not that I thought it was trying to suck my blood or anything, but the bug thing was a nice comfort. Lights on and bat out. I found a small crawl space in the kitchen behind my fridge and after sealing it up, Winston the bat didn’t get in again.

I took to calling the bat Winston because naming him gave him a pet like quality. I often found him sleeping in the stairwell outside my apartment. He was so tiny when curled up that he was just a soft looking little brown pompom. He looked peaceful when not frantically trying to escape the bright light. Winston the bat became an excellent addition to my funeral home stories especially when we were pre-drinking at my place before we walked to the bar and he decided to scratch and click in the walls.

4 thoughts on “Night Demon: Distinct from the fictional world!”