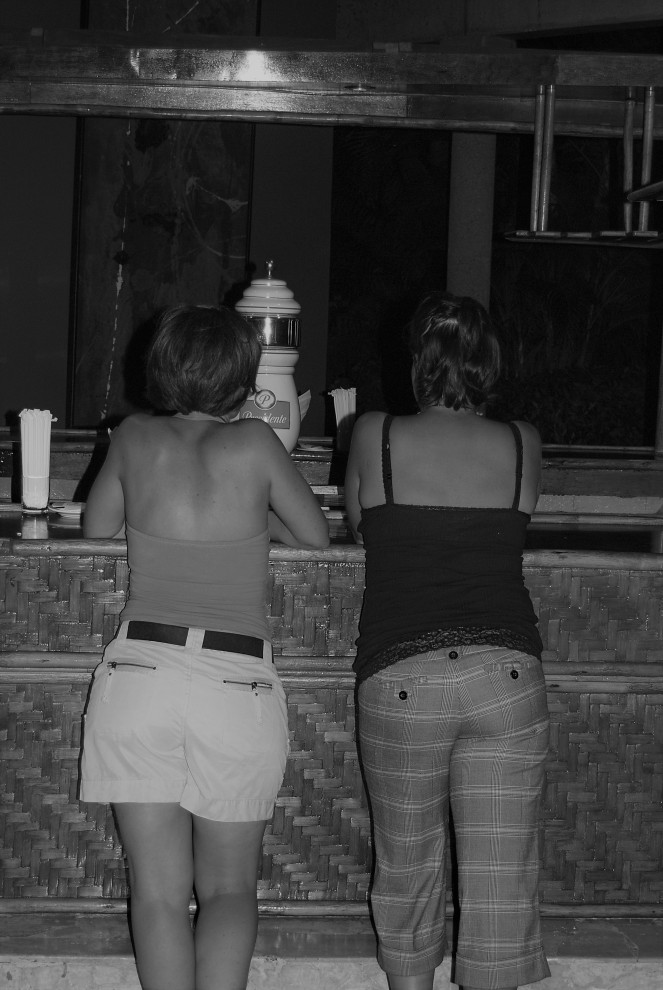 The giggling caught my attention, such a light hearted sound. I found the source buried in the corner almost hidden by the artificial plants, two of the loveliest girls I had seen. As their laughter ceased the one girl stared into her coffee and the other girl stared over her friend’s shoulder through the dirty window. Both lost in thought.

Coffee in hand I made my way to a table close enough to them that I could listen. They were back in conversation and barely noticed as I made myself comfortable and opened the day’s newspaper. The paper offered me a way to appear as if I wasn’t watching and listening to those around me.

Girl one, Alexis, had wavy chocolate hair and matching chocolate eyes with a smile for advertising. She was tiny but she was fashionably dressed carrying a business air. Girl number two was weary. She was pretty with a tough streak. Her smile was less friendly and her big green eyes watched everything. Karis wore jeans and a halter top. She had a “no funny business” air to her.

The easy of their conversation soothed me. Both girls finished their coffee. Mine was cold. I imagined they would be leaving now and I felt sad but suddenly Karis had pictures out. I wished they would turn the album a bit so I could see too. It was a visit of some sort and it went well, but why wouldn’t it? This visit was going well. Oh, there was a camera on the table. I wondered if they would like a picture. “Excuse me…”

Karis looked ready to chase me down if I made a wrong move but Alexis smiled as they leaned across the table so their heads were together. I took the picture and imagined them talking about it and wondering, “Who was that?”

“Thanks.” They’ve spoken together, how nice.

“You are welcome. How are you both today?” Karis was clearly uncomfortable with my presence but Alexis held her smile bouncing the question back. I provided a quick answer before turning back to my paper.

“Well, it is almost time,” Karis said but neither made a move to leave. Instead the conversation turned to a man who bothered them at the gym. Both laugh at a joke I missed. I forced my eyes to the paper, was that joke on me? I needed to try harder not to stare.

They were gathering their stuff to leave and I felt sad because I was going to miss them. They looked nice in their coats all bundled up to face the cold air. They stopped talking and were standing facing my table! “Thanks again,” Karis said. “And have a nice day,” Alexis added. I had to say something, I couldn’t just let them go but they have shocked me and in my haste I blurted out, “thank you for a wonderful afternoon girls!” I watched horrified as both girls stopped and turned, but both were smiling. The door shut cutting off their laughter as I stared after them. I waved to them as they drove off into the afternoon.